I finally pulled the trigger on a trial, and I will admit it wasn't easy.

It was very easy for me to say yes (to that clinical trial dress), but what wasn't easy was finding a trial in a timely manner - or at least timely enough to keep my anxiety from creeping in to every corner of my life. To say it was a weird few months is an understatement, and my head space was clouded over in ways I've never experienced. I found myself withdrawing from the world - not because I was in a depressed state, but because I didn't have an ounce of anything to give as long as my mind was consumed with the reality that I had no treatment options on the table.

It has been nothing short of bizarre to have had a plan for 7+ years, and then all the sudden be left stranded on an island waiting for the phone to ring. All the while knowing cancer was continuing to grow, and the horrid cough I had reminding me daily that things were not improving.

I opted for a phase 1 trial primarily because that's what is available to me and my tumor type. As they say, beggars can't be choosers, and I was at the point of begging. I know most patients cringe at the idea of a phase 1 trial, as it's when the drugs are first tested in humans and the main purpose is to determine proper dosage (meaning how much of the trial drug can be given before side effects/toxicity because an issue).

What I found most surprising once I jumped into the clinical trial pool was how hard it was to actually get into a phase 1 trial - primarily because of space available and the timing in which that space becomes available. Phase 1 trials have limited numbers of patients, and it's often doled out at a "one at a time" rate. Meaning in some cases I couldn't start a trial until the previous participant had completed their run.

Over 3 months after my last round of chemo the stars finally did align, and a trial I signed up for over 2 months prior locked in my spot. Ironically it was a trial I had considered last summer, and opted to pass on due to the option of revisiting a previous therapy. I'm playing the long game here, and I knew going in my goal would be to buy as much time as I could. By "buy time," I don't just mean life, I mean time for trials to progress, data to come in, trial arms to open, and new trials to begin. 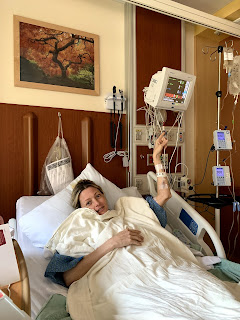 In my case, the trial I was considering last summer changed it up a little from when I first considered it. They went from doing an intratumeral injection of the virus (injecting it right into the tumor) to doing an IV infusion of the virus (a drip from the bag) and found they were getting better results from the IV infusion. It's a clear example that "buying time" bought me a potentially better outcome.

The trial itself, one I've taken to calling Mad Cow Disease, is one and done. It is what's called oncolytic virus therapy, and if you click on that hyperlink you can better understand the use of viruses to fight cancer. I was infused with the virus, spent 24 hours in the hospital dealing with magnified flu-like symptoms, and spent the following week trying to get through the day without an all out crashing nap. We'll see if anyone I work with reads this, as I'll admit to putting my head on my desk for a power nap at work while listening to a webinar because I just couldn't go a minute more without face planting on the nearest flat surface. And they thought my door was shut just to filter out the ambient noise.

Roughly 6 weeks after my infusion I'll have a scan to see if it worked, and then I'm free to move about the clinical trial world again. I do have a few spoons in the pot, and something exciting that's brewing that I'm not prepared to talk about until it's actually underway. But the relief I have now is that I at least have options - something I spent 13+ weeks feeling like I didn't have, and that's a very frightening place to be.

Dreamed up by Sarah DeBord at 1:30 PM

You have writing skills as well maybe all would lead to a book who knows. Stay strong. It’s nice reading you.

Hi, it looks like I will be jumping in a clinical trial soon. I have colon cancer MSS, KRAS, that has come back three times. Now it is in my lymph nodes. I am a patient at MD Anderson and hope to get into their Y90 trial.

I discovered you on twitter just yesterday. Looking forward to reading everything you have written!