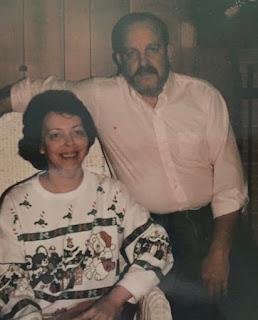 My dad texted me the other night to let me know his sister was dying. Her bout with cancer a few years back had returned, and they opted to keep the information close at hand. He had intended to make the drive down to see her this weekend, knowing it would be his time to say goodbye. But life and cancer had other plans, and she passed away this morning.

In his text to me a few days ago, my dad relayed that my Uncle Bill said he was ready to let her go. That’s a startling and brave statement to make for a man that I know adored this woman for over 50 years.

It's the last selfless act of a relationship - to tell the one person you never want to be without that it's alright to leave.

But I know that’s what happens for cancer caregivers and partners. It’s not that they want to say goodbye, but they know the inevitable end is coming whether they like it or not. And the idea of the end bringing long overdue relief is often so much easier than continuing to watch the person they love suffer.

Death by cancer isn’t the peaceful, quiet, art directed end that Hollywood makes it out to be. It’s not graceful and serene, but months, weeks, and final days filled with pain so uncontrollable the only option in the end is often medicating to the point of sedation. It’s machines, oxygen, tubes, drains, and a withering away of a body that can no longer be nourished as it rots from the inside.

I think death itself isn't want cancer patients fear, but the process it's going to take them to get there. But in all of its brutality, it gives us one gift, and that's the opportunity to say the things we want to say and to say goodbye.

I didn't get to know my Aunt Barbara until I was a teenager, and I found her feisty, witty, opinionated, and never one to bite her tongue. But the humor with which she delivered every line would keep anyone from ever being offended. She loved her family and my Uncle Bill fiercely, and that alone was enough for me to admire and everyone to emulate.

Sara, what a beautiful, honest tribute to your Aunt, who was obviously the ultimate warrior during her journey.

You write beautifully and I know your parents are so proud of you!!
I am sorry for your loss and pray for your family.

Thank you for your candid comments and sharing your knowledge and your heart. We have all known it is what is in the inside of a person (their will, spirit, heart) - that matters most.
I had breast cancer 2 years ago and got lymphedema in my actual breast from radiation. Your perspective helps tremendously.