Over the years I'd heard all the rumors about Erbitux. It's one of the tried and true chemotherapies for colorectal cancer, and in a family of other chemo drugs called EGFR-inhibitors. Though I'm sure I've explained already, let me refresh your memory. Epidermal Growth Factor Receptor-inhibitor drugs destroy anything epidermal (skin, nails, skin, skin, nails), and the one side effect I had heard stories about was the "acne-like rash" that I happened to be blessed with (and am still being blessed with to the extreme at this moment).

Though the initial pain and rawness has subsided since I started last year, the cracked, ashy dry skin has not. The rash ebbs and flows with a rhythm I have yet to decipher, and the demise of my hands and feet has me wishing for days when a little pedicure was all I needed to feel like a girl again.

I knew going in that my hands and feet might suffer, and my nails could get infected. I diligently cared for them every night, and worked foot creams, fuzzy socks, and ointments into my nightly routine with my damn lymphedema. As with most attempts to counter chemo, my efforts were useless to combat side effects.

As my toenails started to ooze, I continued to think that my own self-care would be enough. And like most problems in my life, I'd just fix it myself. Damn ornery women! Only my fixing wasn't working, and the condition in my toenails got dire. So dire that I landed myself a stay at the Casa de Hospital over Mother's Day weekend for some IV antibiotic and a horrific procedure on my toenails that could only be soothed with some OxyContin. Nurses at the other end of the building later stopped by to say the could hear me screaming (foul words) throughout the halls.

This is about to get mildly graphic, but only so I can make a point that chemo isn't just baldness and puking. I feel like a million bucks with a head full of hair, but what you are about to see has been my plight in life since I started on Erbitux last winter.

Apparently EGFR-inhibitor chemo can also cause your nails to split, come off, and become ingrown. And this leads to infections that little Miss Fix-It-Herself can't make better. Since that fateful Mother's Day, I have had to have my toenails tended to on two more occasions, and I know my podiatrist hasn't seen the last of these beauties. We're on a first name basis, and she always gives me permission to cuss like a sailor as she injects abnormally large needles into my toes.

So here's proof that chemo isn't just about losing your hair, being sick, or throwing up. I have a head full of oddly curly hair, and feel amazing. After 5 years of feeling like crap, I remind myself that toenails are indeed overrated, and I just need to put on my big girl panties and deal with it.

A young couple came up to me at the park while I was wrapping up Get Your Rear in Gear - Portland back in August. They had been out for a hike, and asked someone what our event was about. It turned out they had just lost a friend to colon cancer, and wanted to donate to our cause in his name.

They proceeded to tell me about Live Moore Co., something their friend Matt had started after he was diagnosed with colon cancer at 32 - even pointing out a hat one of them was wearing with the logo. I came home and immediately went out in search of this Live Moore Co. they spoke of, and reached out. Within a day I'd heard back from Matt's widow Nikki, and knew that meeting in the park was kismet.

I'll let you read Matt's story as part of the Colon Cancer Coalition's Faces of Blue, encourage you to check out www.livemooreco.com, and of course want you to embrace Matt's message to #livemoore. 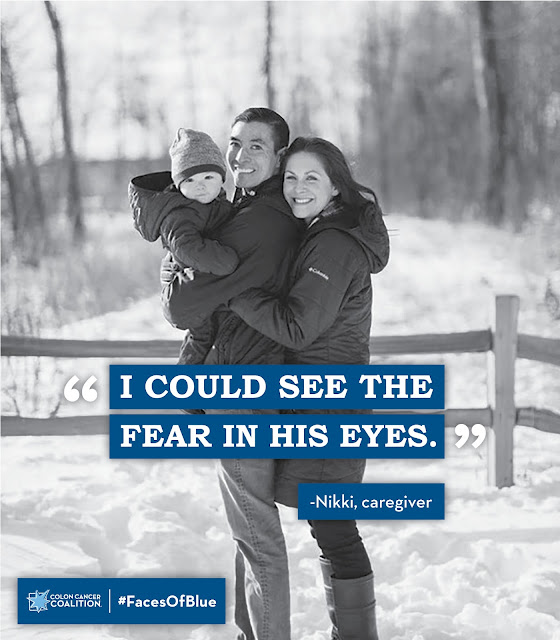 There continue to be far too many young people dying of this disease, and all because they are below the current recommended screening age, don't know the signs or symptoms, are written off when they do go to their doctor with concerns, and are clueless that they can even get colon and rectal cancer while young and healthy.

Matt's son Cullen is yet another child that will grow up only knowing their dad through photos and videos because of this damn disease, and that is a tragedy we must work to stop.