This kid, the one I thought I wouldn't see go off to kindergarten, is in the 3rd grade.

And he did so with that long, luxurious, thick hair he inherited from me. I lived vicariously through it all the time, and I would like to thank him for all the French braids he sat still for and man buns I tried to get him to wear out in public.

He's always preferred a shaggy surfer boy look, but in this last year he took it to the extreme, and for one very good reason.

His inspiration to grow it out started last fall, when he met a woman who made wigs for cancer patients with their own hair. It occurred to him that he could grow his hair out to make me a wig. The only catch is that it doesn't look like I'm going to be needing a new wig any time soon. The cause remained, and the hair was grown.

He put up with TSA agents referring to him as my daughter on multiple occasions, and I put up with him wearing a constant beanie or ball cap.

But all good things must come to an end, and with the end of summer and my patience for deep conditioner and combing out rat's nests growing thin, the hair was cut.

I've yet to donate it yet (purely out of laziness), but with the first snip of the scissors, I can assure you the process has begun again.


Dreamed up by Sarah DeBord at 6:23 PM 5 comments: Links to this post

So many blogs ago, I think I mentioned that the 5-year stats for stage IV colorectal cancer survivorship aren't good: 10-12%. That means that 5 years from diagnosis, only 10-12% of those diagnosed stage IV will be alive. I know there are some other factors such as age, general health, and dying of other things that are considered. But after a few years in this business, it sure seems like that stat is pretty accurate.

It's weeks like this where I know it's got to be pretty damn close, as I've sat in front of my computer and watched 4 more young people die of this f*cking disease. Some I knew, and some I knew of through one simple degree of separation. But all were young and all were parents to little kids. All had to say goodbye to the babies they wanted so badly to live for. I can't even wrap my head around the thought or I'll start hyperventilating.

Some of these babies are just babies - the very space I was in 5 years ago tonight - curled up on the couch, nursing my baby to sleep as uncontrollable tears poured out of me. All I could think about was dying, and this little baby never knowing how much I obsessively loved him. I know these parents faced that very fear and disappointment to the bitter end. 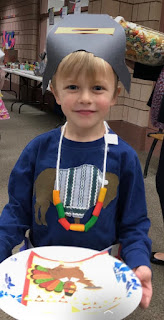 I will think of them, and those that have gone before as I officially step in that 10-12% today.

And as much as I should be celebrating what 5 years of survivorship means for me, I can't help but have my head in the clouds thinking about the families that are having to plan funerals during a week that should be about thankfulness. I'm sure they just want to punch anyone who utters the word "thankful" in the face right about now.

I was volunteering at the boy's school yesterday when the kindergartners came marching down the hall in pilgrim hats on their way to a feast. Lachlan looked up and saw me with surprise. A huge grin came over his face, and I realized how important it was to him that I was there. My heart breaks thinking about those little faces that will be looking up in the coming weeks and months only to find that mom or dad isn't there - and what a immeasurable loss that is to their little lives. All because of a cancer that young people have no clue they can get.

A few weekends ago I was at a symposium for metastatic colorectal cancer patients put on by the Colon Cancer Alliance. It was a chance for me to professionally connect with other stage IV survivors, caregivers, and advocates, but also a chance for me to be around my people. And I couldn't help but walk away in awe of the many I met who have long passed the 5-year mark, and are living well past our statistically expected expiration date.

I have no doubt I will continue breaking those statistical expectations, too, and I will do it loudly and in the name and memory of those who never made it to this point. Here's to the next 5-years.

Dreamed up by Sarah DeBord at 8:41 AM No comments: Links to this post

I'm about 10 rounds late in posting this, but over the summer I passed the 80 round milestone with chemo. And as you may know, that's not 80 rounds of some light and fluffy oral chemo that makes me want to go to bed at 8:30 instead of 9 every night.

That's 80 (technically 90 at the writing of the post) rounds of the nasty, toxic, vomit-inducing, anxiety-triggering, nausea-producing, hangover-making, fatigue-bringing, hair-losing, crap that makes a girl feel like shit and lay in bed with hot flashes for 3 days.

And as kindness and community sometimes go, the wagons got circled to celebrate. People came in to town, BBQs were had, gluten-free cake was bought, and I was alive to see it all!

And now I'm sitting in front of the fire enjoying the morning after my 90th round. And I'm only able to sit here and type because number 90 mark a change in directions - a change I've been wanting for the last 3 months, as some mild growth in one of my tumors had me mildly uncomfortable.

No one knows my many, many tumors as intimately as me. After all, I've been watching them grow up for the least (almost) 5 years! And despite the oncology world considering me stable, the very minimal growth (2mm every 3 months) was an indicator to me that the chemo I had been on for the last 3.5 years was no longer working on at least one of those suckers.

I went in yesterday prepared to put up a greater fight over switching up chemo than I did at my last appointment. I was prepared to go home and create graphs of tumor growth to prove to my oncologist that FOLFIRI had really run it's course and it was time to move on.

But all that pumping myself up wasn't necessary. As expected, one pesky little tumor added on another 2-3mm of weight, and he sat back and easily agreed that it was time to move on.

I'd say I had a remarkably long run on one drug that at one point shrunk my "innumberable" tumors, then just kept them from growing, and has slowly shown that it's no longer in the mood to keep one of those bastards contained. I'm still stable, and the "progression" I have is still debatable. But it was debatable enough to finally break-up with FOLFIRI.

My new drug of choice is a typical third line of defense in colon cancer, and it's called Erbitux. Having a wide network of colorectal cancer survivors in my community, I was able to get the inside scoop on what to expect with my new friend. Across the board I couldn't believe what I was hearing. There would be no nausea, no fatigue, no staying in bed all weekend, no thinning hair, no feeling like crap. I would feel totally normal. And I could have HAIR again! Not that the thinning hair and short hair was getting to me. Having lost it at least 6 times over the last 3 years, I was getting rather use to the cycle. But the idea of being able to dust off hair dryer, buy some deep conditioner, and shop for ponytail holders again is rather exciting for this long-blond-hair-kinda-girl.

The one side-effect, and it can be a big one for a vain person such as myself, is an acne-like rash. As much as one can cross their fingers and hope they're one of the lucky ones that doesn't get it, you actually want it. They say the worse the race, the better the drug is working. So cheers to me looking like a teenager who never washes their face!

I was set up with a sampling of lotions, washes, topical creams, and what I think is an acne antibiotic called Minocycline. The good news is the rash is only temporary, and so predicable that I was given a timeline of what to expect: rash, rash drying up, rash getting crusty, rash itching, skin getting crazy dry, etc. As miserable as it's all going to be, I think it's a fair trade for the chance to feel normal all the time, and stop to chronic cycle of feeling sick and tired every other weekend.

To wrap this up, I'm going to leave you with photos of my latest CT scan from Wednesday. When I say I have so many tumors in my lungs it's like looking at sprinkles on a cupcake, I wasn't lying. But short of seeing images like these, I'd have no clue. I don't feel them, they don't bother me, and my breathing isn't remotely effected. It always amazes me that this is what's going on inside of my body.


Dreamed up by Sarah DeBord at 10:08 AM No comments: Links to this post