Getting a little shaggy if you ask me. Though it has made a few public appearances (at the gym), it's going to need a little trim and some hair product before its true social debut.

Dreamed up by Unknown at 9:10 AM No comments:

As if suffering through another morning of bootlegged Tracy Anderson videos on YouTube wasn't enough working out for one day, I had to fulfill a promise.

I made a deal with swimmer Kyle that if I lost enough hair during this treatment, I would finally get into the pool with him. He has, after all, bought running shoes and joined me at a Spin class. It's the least I can do to jump in the pool with him and do more than my usual piddling around with deep water jogging while keeping that overpriced dye job safely out of the reach of chlorine.

Remember that dye job? The one that ended up as scraps in the sink a few months back? Yeah, me neither.

There have been a few salt water pools in my past, but my hair has mainly stayed up and out of harms way for the last decade. With my virginous sprouts reaching an inch long and completely untouched by a stylist's hands, I'm giving it every reason in the world to get wet.

I'm still battling my peeling feet and hands (referred to as hand-foot syndrome in those hip circles I hang out in), so I know a nice little water workout will leave them looking like I contracted some public pool disease I'll happily share in the showers. At least I can spend the ride home peeling and picking at them in the passenger seat of the Prius.

I took a leap of faith and bought a real swimsuit as to look the part. Add my matching swim cap and some pink goggles and people will at least think I know how to swim; until they actually see me swim. It's not that I can't swim, it's just that I lack the proper technique. I even took swimming in college for a PE credit, but the sadistic teacher stood at the side of the pool channeling Esther Williams and threatening to fail me over my breast stroke kick.

I have faith that if I don't make the Olympic swim team, I can potentially survive a sprint triathlon next year. That is, until someone kicks me in the head, tries to swim over me during the first stage or I decide the water is too cold and I quit. But first, I need to get from one end of the pool to the other without looking like a dying seal.

I'm swimming because I CAN.
Dreamed up by Unknown at 8:36 AM 1 comment: 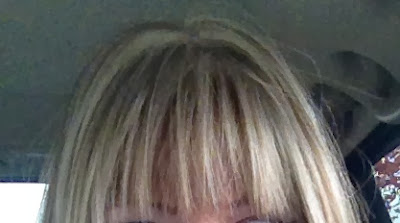 Though I do love my wig like the cuddly little pet it is, I've never been 100% comfortable with what it does on its own. It loves to hang down in my face, and no amount of bobby pin conditioning or tucking it behind my ears has taught it to stay to the side. So I'm left to wear it like I did in the 3rd grade (minus the giant bow) or go get bangs.

Giving the wig bangs is like getting a tattoo; once it's done, it's DONE. And on a $400 wig, one must be very sure of their decision and confident in the person holding the scissors. I know you didn't finish that last sentence because you couldn't get past the price tag. Me neither. Especially when my insurance doesn't cover it (If you participated in that little crowd sourcing fundraiser a while back, know that a few hairs on that wig have your name on them).

I was looking forward to the big move for many good reasons, and one of them happened to be getting bangs cut by someone who does this sort of thing for a living AND knows me. And the knowing me part was important, as it wouldn't leave me having to explain my situation to a perfect stranger before they altered my look. No explanation necessary is a nice relief for someone who routinely has to explain herself to strangers.

I am thrilled with the outcome, even if I did have a minor little bump in the road involving some homemade gluten-free chicken nuggets, the oven and synthetic hair that's not partial to minor doses of heat. One hour and a very tiny pair of scissors later and I have picked my devastated self up off the floor and readjusted my wig. Apparently when they said to avoid hair dryers and flat irons, they failed to mention baking as well.

Dreamed up by Unknown at 9:14 AM No comments: