Put that Camera Down

My photo album entitled "What I Look Like on the Inside" continues to grow. I must say that going in to have a camera stuck down your throat requires much less preparation than having it stuck in other holes. The only down side is having a sore throat, whereas in the other case, you don't have a sore anything if you use those flushable wipes properly.

My bronchoscopy when well, the pulmonologist said he took plenty of good samples and I finally got to see my infamous nodule. When I first looked at my CT scan, I was a little overwhelm. I would have asked a million questions about the million little white dots that appeared, but I had a nebulizer in my mouth to numb my throat and I could feel some drugs starting to take me to a better place. And when those drugs kick in, it's best not to open your mouth or you might start singing songs from church summer camp circa 1985.

If you doubt this, Kyle has a video he'd like to show you from the recovery room of my last colonoscopy.

I was able to snap a few picture of the scan after the procedure and all I can do is stare at it with a huge pit in my stomach. Of course I don't understand it, but even from my little perch, it doesn't look pretty. 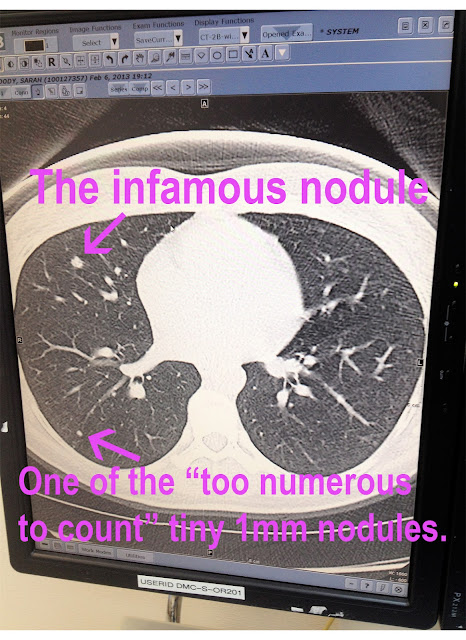 The biopsy results should be available in a few days, but in Cancerville, I still have to wait another week and then some. Because that's what cancer is really all about: waiting. Lots and lots of waiting.

I'm currently up in the air for tomorrow's PET scan. I've been told not to cancel the appointment yet, but my insurance carrier has sent me a nice letter saying they will not cover it. In their eyes, it's currently being considered an "elective" procedure. I'm not sure if that's because my oncologist did not send them enough documentation, or they think that my 7mm nodule is too small to justify it. Apparently insurance companies make a stink about the money they'll spend on a PET scan to detect cancer, but don't put up a fight when a hospital charges $400 for an Advil.