And the End is Even Farther than Before

Two chemo words I'm going to teach you today that pretty much run my life:

Neutropenic: Having an abnormally low number of neutrophils in the blood making susceptibility to illness extremely high.

Anticipatory Nausea: Nausea occurring before a new cycle of chemotherapy in response to conditioned stimuli, such as the smells, sights, and sound of the treatment room. It usually occurs after the person has experienced acute nausea and vomiting. Or in my case, any time I'm within a half-mile radius of the oncology building regardless of treatment.


I was relieved a few weeks back when it finally seemed we'd found the combination to get me through treatment in the two week intervals I'm meant for. At this point I'm totally fine with the reduction in dosage and willing to tolerate the 4 Neupogen shots and their side effects. If it means getting to the end faster, than I'm willing to suffer. Spoken like a true champion, right?

Actually, spoken like someone who wants to finish in time to make it to the Minnesota State Fair at the end of August. I'm still bitter I picked a strawberry malt from the Dairy Barn over some deep fried key lime pie to meet my dairy-item-for-the-day requirements. I need to return and rectify the situation while listening to Rascal Flatts from the Grandstand.

Last week I was scheduled for the same routine: 4 days of shots. But for whatever reason, the nurse saw my post-shot normal counts, said I didn't need a shot and called my doctor to confirm. By Wednesday, my counts were dropping but still normal, so once again he said I didn't need a shot. I didn't think it mattered that they were normal. Of course they're normal. I just got a shot to make them normal. Give me the shot to help keep them normal.

I've been down this road before. Get a booster shot and my counts are off the charts. One of my kids could puke in my lap while the other stuck his snotty fingers up my nose and I would be so super charged with white blood cell counts I wouldn't get sick.

But as the week ticks on, the counts tick down. So last Wednesday I was dropping, but merely dropping from the high to the normal. I knew the normal would keep dropping to the low. I've got the track record to prove it.

Sure enough, yesterday's blood work was bad. Things had not only dropped, but in comparison to all my other labs, my neutrophils and my platelets are the lowest they've been. I wonder if I should be walking around with a mask on Michael Jackson-style.

I rounded up my miniature blond date in the waiting area outside the infusion room (no dirty little germ magnets allowed) and we headed for the car. I was devastated. I was frustrated. I was pissed.

And with Merrick taking his sweet time to bucket up as usual, I had the time I needed to quietly cry. Not sure why it struck me in that moment, but a mini-meltdown was in order. I rarely have them in general, but I've been a bit more prone during treatment. I didn't realize how failing another round of blood work was going to take it's toll on my mental prowess.

Chemo is the great destroyer of all things. We hope it destroys the bad, but we know it will also destroy the good. It's a small price to pay in the end, if one can really put a price on life. I think I get frustrated with my own body and its lack of control. I went from knowing how to control my health through diet and exercise and now I can't control it no matter what I do.

I've learned that it doesn't matter how many whole foods, super foods or power foods I put in, they are no match for what the mighty chemo can do. I'm eating nutrient dense foods and getting no where in my fight to keep myself well on the inside. I just try my best to look well on the outside.

I just want to be done and I want my life back. I want this cycle to end and my trips to that building to taper off.

I had the privilege of meeting a fairly new patient while waiting on my lab results in the infusion room yesterday. She asked if it was my first time there for treatment as she'd never seen me before. I explained that I'd been at it awhile and usually came on Wednesdays. She was surprised because I still had my hair. Like most people, she assumed that all chemo patients lose it. Though it has thinned to my liking, I told her that my particular treatment did not cause major hair loss most of the time.

She probably also noticed how radiantly blond it looked since I finally got around to getting those 3 inch roots done. It only took 7 round for me to accept that I wasn't going to lose my hair and it would be worth maintaining.

I know having my hair makes me look less sick. But when I look at the sheet of lab results handed me yesterday, I know otherwise.

I could see her eager yet nervous anticipation of her own road ahead. She was 12 days in to her treatment and knew in a matter of days what was left of her hair would be gone. She was already starting to see clumps come out and was debating a cut just to beat it to the punch. She was upbeat.

Though I'm not in her shoes, I suggested she shave it off as a power move. You be the one responsible for your hair leaving your head, not chemo. It's like beating chemo to the punch. You know it's going to happen, so perhaps being the one to control the event will empower her a little over the inevitable.

I don't know how long she has to go, but I could see that optimism I once had. I still have it, it's just a little beaten down at the moment. I was staring at the light of the end of the tunnel. I could see the end date on the calendar. And for now, that date as moved on to another month not quite in view.

And speaking of dates, I so enjoy being the third wheel on Kyle's dates with his iPad. 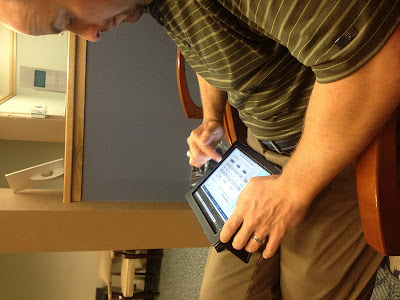