It's a World Record

I don't think I've ever gotten a post-treatment post up this fast. Ever.

I'm going to have to give credit where credit is due, and all that glory belongs to my reduction in chemo dosage.

Despite being above the treatment cut off last Friday, those silly little neutrophils had dropped back down to barely passing by treatment morning on Wednesday. How, after four whole glorious weeks off, do they drop I don't know. 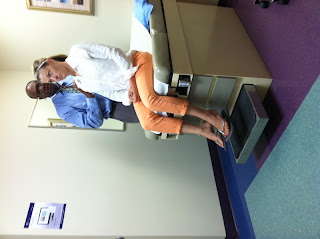 So there I am, treatment morning, trying hard to make my hair look like I didn't go to bed with it wet (by assisting its beauty with a Purdy Band) and the doctor slapping me around and calling me neutropenic again. Again!

Neutropenic is just a fancy way of saying my neutrophils suck.

The cut off for treatment is 1.5 and mine were hanging out at 1.52. Such rebels.

The solution for my problems has been cast in stone and it officially is a 20% drop in the dosage of chemo I will be getting. A few months ago, I would have put up a fight. But at this point, I only hoped it might make me less sick. And any sense of defeat I might have had was wiped out by my loving husband who reenacted a conversation between my oncologist and my nurse when I was first introduced.

Doctor: "This is Sarah and you won't believe the dose of FOLFOX I'm going to give her."

I apparently missed this conversation and the sinister laughs that probably followed, but it was Kyle's gentle reminder that my little body had gone balls to the wall for the first half of treatment. And no matter how healthy I ate and how much good stuff I put in, this fragile shell was no match for the mighty toxin.

I was OK with the reduction. I did not feel as though I'd failed. I've realized it's just the luck of the draw. Why some people skate through this very treatment with out missing a step or feeling a side effect I'll never know. At this point, I just want this to be over without taking my body to the point of no return. I want to emerge healthy so I can continue on with life as usual and no residual side effects.

Perhaps it was my four weeks off or perhaps it was that 20% reduction, but round 7 wasn't miserable in the most miserable of my experiences. Nothing can compare with the misery of round 6, so I imagine it can only get better. I was able to master the art of dry heaving without fear of anything coming up and had no weird side effects like my nubby hands. I am sitting here a mere 24 hours from my pump disconnect typing a post-treatment blog. And some of you faithful followers know those very post often don't show up until Tuesday or Wednesday.

Now, because I am neutropenic and my bloody blood counts don't like to bounce back on their own due to laziness, I am back on the naughty list for booster shots. This time it will be Neupogen on Sunday, Monday, Tuesday and Wednesday with some blood work mixed in for fun. Good times had by all, especially my hoarded collection of flushable toddler wipes and Imodium. I'm saving those like it's the end times, baby.

Here's hoping that the reduction in treatment and the onslaught of Neupogen make it possible to get treatment on schedule for once.