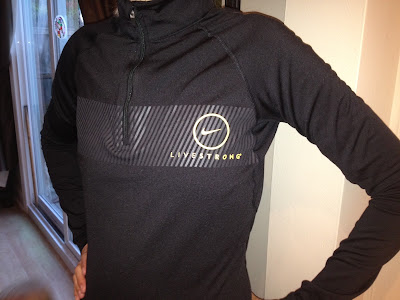 This is HOT! I feel like I'm part of Lance's inner circle, compliments of that chick who ran for Team Livestong during the Shamrock half and this little "hook a sister up" gift of Lance-love. She also wanted me to be a soul sister and rock some matching Livestrong when she finished and blend in with all of her mini spawn that were also rocking little Livestrong gear that day.

This is so hot that when Lance finally meets me, he's going to ask for a love child and I'm going to have to deny him the dream.

For starters, I already have a baby daddy, and one is hard enough to keep track of.

Secondly, the shop is closed. 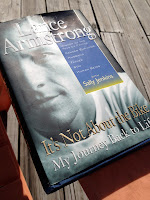 I also read Lance's book (circa 2000, when he was happily married) on loan from a friend, who dropped it off when she dropped off dinner for us one night. And to think, a few months ago I wouldn't have given Lance the time of day. Now we're practically friends on Facebook.

And for the record, I don't think he was an evil dad who ignored his daughter when he finished the Half Ironman last month (click link to watch it). I would have done the same to my own ducklings had I just completed 5 miles 70.3 miles and there were screaming people and cowbells ringing in my ear. Wait, I think I ignore them already when it's silent and I'm not even running! 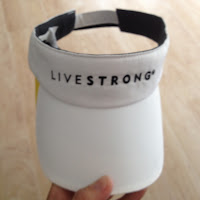 And yet I still don't have a yellow bracelet. You would think after all the whining I'd been doing about the yellow bracelet, my baby daddy might have picked me up one when he was at Dick's Sporting Goods yesterday. But that's OK, because his thoughtful self brought me home this visor. 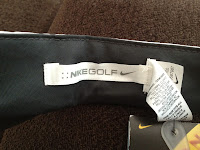 I thought it was so sweet that he had taken the time to go over to the women's department and look around for me. He knows I have a mild obsession for finding Nike Tempo shorts on clearance, so I'm sure that's what he was looking for when he spotted this baby on sale. Then I went to photograph it for this very blog and saw this inflammatory label and realized the truth! He'd never left the golf section! This man would do anything to get me to put on some golfing clothes, even if it means trying to pass off this golfing visor as running gear! And in the name of cancer?!?! That's just wrong.

I've been following Livestong on Facebook and I have to say I'm pretty impressed with what they are doing in the cancer community and how far their outreach goes. They really do a thorough job of covering all the bases, the needs, the questions and the voids that a cancer diagnosis can leave family questioning.

I've actually found some inspiration from the book, and was especially interested in his chapter on chemo. I walked away with some simple confirmation I really need about now. I'm starting to feel like such a pansy for the way this chemo thing is really beating me up and taking it out of me. It's starting to make the idea of a marathon sound sane, because running a marathon has got to be way easier than going through chemo. If super human Lance says chemo is craptastic, then is must be exceptionally craptastic for us regular folks. If Lance says it's hard, you better believe it's hard.

If he can barely bike up the hill out of his neighborhood without collapsing with his bike on a neighbor's lawn during chemo, I need to be happy that I can even get out of bed in the morning and stop beating myself up for not hitting the pavement at this point.

I just know that my day will come again, and there's no shame in starting at the beginning again.