A delayed round five started with great spunk as usual. Apparently it only takes me a few days to forget how miserable it is to feel miserable and I walked in smiling. The Friday before, I did not walk in smiling. 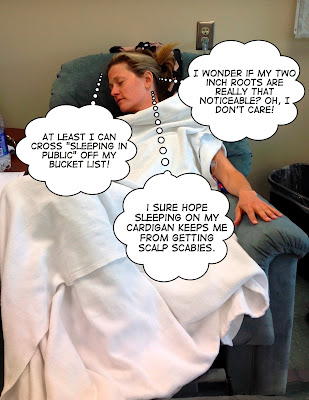 My sugar daddy had to leave me early to trek to Richmond for a meeting. Apparently sugar daddies have to go to meetings if they expect to maintain their sugar-making abilities. And I support sugar-making!

After the previous Friday's intoxicated dehydrated trip to the doctor, I was eager to actually return and talk to him while not sitting in a chair and sleeping with my head resting on the wall of sound and hydrated mind. As I mentioned in that post, chemo works best when delivered on schedule. We weren't sure if the doctor was sizing me up on Friday and deciding I wasn't "tolerating the Neupogen" based on my current condition or something he wasn't telling us. Those symptoms I was suffering from were easily controlled with the right meds, which I didn't have with me at the time.

Understandably, Kyle and I want to stick to the every-two-week chemo schedule. We want the best possible outcome and I don't want to finish this season of my life with any regrets. Who would? I'm willing to suffer if it means knowing I did everything I could to keep the cancer from coming back. Are you with me? Making sense?

I LOVE feeling nauseated all the time if it means never having cancer again! I just returned from having my weekly blood work done, and while sitting there waiting for results I realized that I could pretty much throw up on demand. I deal with the random waves of nausea, but I'm sure walking into the oncology building just invokes some psychosomatic reaction. That blood work was normal, by the way, so no booster shot today. This further fuels my theory that the only reason my blood counts dropped after getting a booster was that weekend I spent cleaning up vomit. The oncologist and his PA seemed to agree with my theory when I presented it last week. My immune system did everything it could to keep me from getting sick, but could not rebound after it was all cleaned up.

Apparently we didn't have to go in fighting last Wednesday. The doctor and PA heard me out and agreed that I could stick with the every-two-week schedule after all. The catch is I have to not only get my blood counts checked on Wednesday as usual, but also Friday. I signed on the dotted line with ease.  Should I need Neupogen again, he's going to lower my dose due to my "size." Apparently he's just realized I'm still underweight? He thinks that will lesson my reaction.

Last Wednesday, while sitting in my $11,500 recliner, I noticed something I'd never seem before. How I missed this I don't know, but it made me unplug my IV pole and make haste for this shrine to all sources of useless information. 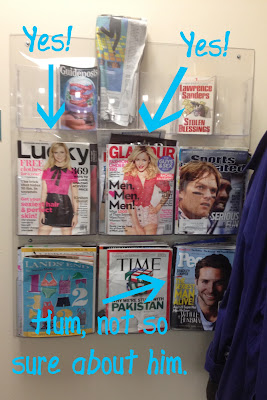 Yes, please! Can I have another dose of chemo so I can spend all day here?
I woke up Friday morning after a solid 11 hours of perfect sleep to a text from Kyle at 11:30pm that said: "What's the name of Merrick's doctor?" Before panicking, I check my email and found an explanation. Despite seeing a very normal and happy Merrick on FaceTime before he went to bed, he apparently was suffering from a massive ear infection. By 11pm, he was a flip-flopping mess and Kyle realized that laying in bed with him wasn't going to fix anything.

The PA that fawned over him attended him in the ER said he must have a high pain tolerance because his ear drum was bulging and about to rupture. How a kid that tells us everything we never wanted to know managed to not mention that his ear hurt at all we don't know. But one trip to the ER resulted in Merrick having his first ear infection and his first experience with antibiotics. I've always said that Merrick has single-handedly proven that breastfed babies aren't healthier because he seems to be sick all the time. But he still managed to make it this far without actually needing the bubble gum drug. Can't say the same for his little brother.

After many hours in the very ER that he built, Kyle came to fetch me for my return to reality pump disconnection. As always, I'm thrilled to get rid of it. So thrilled I'm self-family portraiting in their brassy elevator again. 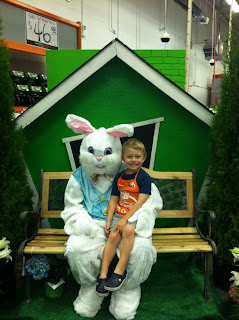 Saturday morning, Merrick was well on his way to mending and asking us every two hours if it was time for that tasty amoxicillin again. He went on his way to The Man Store for their monthly kid's workshop, made a bird feeder and further fueled his absolute belief in the Easter Bunny. Ideal for the day before that bunny was to go around pooping eggs in our backyard. Of course the bunny poops the eggs as he hops around. How else do they get there?

Sunday morning, the Easter Bunny worked his magic outside while Memaw worked her magic inside with Easter lunch, including a homemade sugar-free key lime pie. Props to her for slaving away while I laid around uselessly. Had I been left in charge, it would have meant Easter dinner at Cracker Barrel.

Though Easter and Christmas are the two times of the year I want to avoid church because of my love of massive amounts of people, we went and it wasn't that bad. I wish I could say the same for all the attempts at a family photo. At least 50% of us looked normal and followed directions.
I'm pretty much back to feeling good despite my random waves of nausea. No Neupogen shot today. Wish I could say the same for the 64 year old great grandma waiting with me. I was trying to do the math when she finally admitted that she got married when she was 17 and had her first baby at 19. I was still trying to do the math and had a few questions, but I kept them to myself considering I'm not that confident in my math skills with a calculator. I'm definitely not confident doing it in my head.

I'll have blood work done again on Friday so I can prove my staying power to my oncologist and then I'll look forward to my magazine rack of goodness and thousands of dollars in nausea meds next week.

I have some recent good blood work results if you have need of them. Although somone might catch on that I am slightly older and not naturally blonde.

Something tells me that I am not naturally blond either. But really, who is these days?