Dreading with a View

After several gym attempts, Lachlan made it known to everyone in the child care center that he was not a gym rat, especially during nap time. Couple that with all the haunting visions I keep having of sweaty old men cruising the weight rack and rotting plums fermenting on the treadmill and it was pretty easy for me to throw in the towel.

Dear Gym,
Thanks for the not-so-free trial. Your mother was a hamster and your father smells of elderberries.
Love,
Sarah
PS-Can I have naming rights to the plum beer you're brewing in the cup holder on that treadmill?

I also knew I had a back up plan, albeit one without child care. But at least I had a plan!

And this one had a view.

May I introduce you to my secret place. Why yes, that is the ocean. 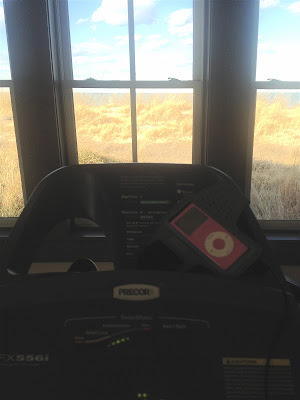 I hadn't been back to this place since I joined Stroller Strides, and it hadn't changed. Perhaps because it hardly gets used. The people that have access to it probably have this very equipment in their lovely homes, so why bother coming here?

I'm rarely receptive to second chances, because I'm hard core like that. But the treadmill needed one and I needed the treadmill.

To the laymen, this just looks like gym equipment. But to the expert, you've already called my bluff. That's no treadmill, it's an elliptical. My second attempt lasted 5 minutes before I hopped over to this baby. But in an act of complete redemption, the third time was the charm when I made it 3 miles.

The secret to treadmill running I've discovered is competition running buddies. On a Sunday not too long ago, I returned to that gym (whose membership I've still yet to cancel) and found that as soon as that chick trying to show me up my running buddy jumped on the 'mill next to me, I had the threatening motivation inspiration to keep going.

Moral of the story. Treadmills suck unless it's a race to see who's more badass you're running with friends.
Dreamed up by Unknown at 12:20 PM