Because what I really wanted to do 2 days before Christmas was stand in line for 2 hours to see Santa.

It was the guilt that got us in the end. The day before, Kyle took the boys up to Williamsburg to the Yankee Candle Factory to get them out of the house and give me a chance to rest in peace and quiet. In addition to the pain I was still in, I felt like the flu had descended and all I could do was lay in bed and be useless.

I laid on the couch and watched Kyle dress the boys in clothes not befitting a photo with Santa. At that point, I didn't care if they even matched. At least they were dressed in something other than pajamas. I almost told Kyle to put Merrick in a cuter shirt in the event they took photos with Santa, but I didn't want him to have to do any more work than he was already doing. The man was going above and beyond the call of his man duties during my medical leave.

Upon their return from the Yankee Candle Factory, Merrick promptly walked into my room and told me that he had his "photo taken with Santa but daddy said we couldn't buy them because I wasn't dressed very cute." True. Very true.


The sadness and disappointment in his voice almost broke my heart. It apparently broke it enough to get me out of bed the next morning and agree to go to the mall and stand in line with 5,205 of my best friends and their snotty little kids. At least my snotty little kids were also there to contribute to the snot swapping.

1 hour into the wait for Santa and I started to wish I had made Kyle change Merrick's clothes.

And 2 hours later, when his moment of glory finally arrived, Merrick didn't even look at the camera. Turd. 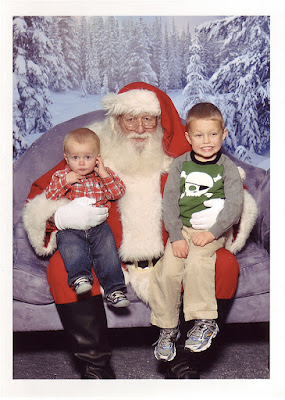