I personally picked Chris 4 Life as my non-profit of choice for the Mom's Gotta Run Shamrock training team. But I'll admit that LIVESTRONG was the first organization that came to mind when I paired cancer and running in the same thought. I can remember running past the Team LIVESTRONG during the Wicked 10K, but at the time I was more focused on not getting blown over than what that mile actually meant.

I was a little wary because they are so large and in charge and nationally known when it comes to cancer. I didn't want any donations toward fundraising efforts to get lost in the mix. But at that, I hadn't really delved into the world of cancer oriented non-profits. I was still very new to the game and still trying to wrap my brain around the fact that I even had cancer.

That's why I appreciated a little graphic they posted on their site titled "Where the Money Goes." My simple mind appreciates simple graphics. I'm the type that would much rather look at a map than read directions. I'm visual, I like books with pictures and I like two-toned illustrations like this one. 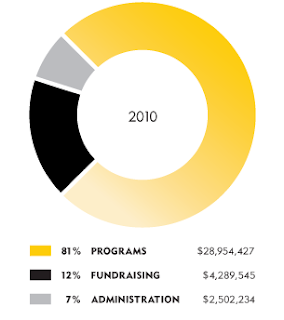 That's impressive. That's inspiring. That's making me want to go out and buy a little yellow bracelet. Or maybe an overpriced t-shirt. Or maybe, just maybe a pair of my beloved Nike Tempo Shorts that support the cause and blast the logo.