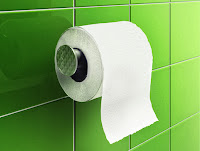 I passed the time in the waiting room trying not to stare at other people. It's like I was silently sitting among kindred spirits and wanted to gather everyone around the campfire to compare the scents of flushable wipes. These were my people, but staring too long would be taboo and we all had to pretend we weren't sitting in the very office of the doctor who deals with all things digestive.

As I waited to meet the doctor, I was able to admire all the pharmaceutical-supplied artwork in my room labeling the digestive system, illustrations of digestive issues, photos of the small intestine when plagued with things like Crohn's or Celiac Disease, graphic pictures of things even I don't want to write about and the stages at which the liver disintegrates and becomes a cesspool of Jack Daniels and Boone's Strawberry Hill. It really was skillfully decorated and it left me almost grateful for what I was now beginning to think might be a comparatively minor problem in the grand scheme of gastrointestinal disasters.

After going over all my symptoms with the doctor and using all my big girl words again, she concluded that I must have something called Ulcerative Proctitis (UP). She explained the symptoms of UP and I agreed we probably had a ourselves a match. I walked in fearful that I would walk out without knowing what was going on. Now it was so obvious that I was almost joyful.

Ulcerative Protitis is an Inflammatory Bowel Disease (IBD). Not to be confused with Irritable Bowel Syndrome (IBS), which is a label I think doctors give to patients with often unsettling and unpredictable bowel issues for which they can't find a cause. IBD includes some chronic heavy hitters like Crohn's and Ulcerative Colitis. If you know someone with either of these, you know their relationship with the toilet can be pretty miserable. I was certain these weren't my issue because I was missing the tell-tale symptoms like pain, cramping, bloating, pain, pain, cramping, pain and pain and massive amounts of blood.

She gave me a magical prescription that would start clearing things up in a matter of days and all the sudden the sun looked a little sunnier and future plans looked possible. I had already signed up to run the Surf-n-Santa 10 Miler and was doubtful I could run it if I wasn't even able to get though the longer training runs needed. Now I had an answer, the solution and a few more weeks to train. Inspired, I hit the pavement that weekend and was certain I'd be at the starting line after a successful long run without interruptions.

I had a week and a half between my GI appointment and the colonoscopy. I wasn't concerned because I knew I was going in just to get confirmation. I was so certain of the results that we'd planned for Kyle to stay home with the kids and my mother to be my responsible adult and ride home when I woke up from that special little nap.

If you are cringing at the thought of a colonoscopy, this is where my lack of shame comes in to play. You have to remember that this is what they do for a living. Your rear end is just one of the masses and I can assure you if they ran in to you at dinner, they probably wouldn't remember what you looked like from the other end. They've also probably seen bigger, older, hairier, smellier and more memorable in their professional careers. Besides, you're asleep so it's not like you're going to know what's really going on down there. These are the people that chose to go into the business of bowels. If anything, the joke is on them.

In the mean time, I set out to buy all the things I needed for the prep and dreaded the day that I was stuck at home with both kids, no coffee and nothing but clear liquids for the entire day and a half.
Dreamed up by Unknown at 5:10 PM

You are so hilarious!

I have to keep this in mind when I have my colonoscopy--one of the many pleasures of aging.

I could write a book on the best way to go about it. There are plenty of little secrets you learn along the way, and 1st timers always come to me to ask. But now the FDA has approved a screening that replaces it, so not everyone will have to go under and get scoped.

A new screening test to replace it? But just think of all the fun we'll miss. O.o

Looking back now at all the stages, I am so glad you have doctors who know what they are doing.