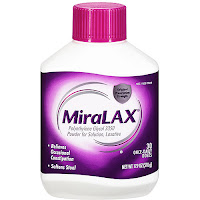 If there's one lesson I've learned from the two "bowel preps" I've had to do in the last month, it's to actually mix the Miralax with something you like drinking. I don't like Gatorade, but naively followed directions and spent most of the first day trying to drink a drink I didn't like that was made a little bit worse by the thickening affect of a massive dose of Miralax.

I called it my Miralax Martini.

I finally managed to get most of it down, but not in the one hour time frame they claim you need to drink it in and not without diluting it ten fold. In summary, I drank about five times the fluid necessary in about four hours longer than expected. All in the name of not gagging.

And don't let some nurse fool you into thinking Miralax is tasteless. It is, if you take it one dose at a time. But when you dump 7 doses into a 32 ounce drink, it can be a little crunchy if not mixed well enough and makes everything taste a bit more syrupy.

Now that I'm a master of the Miralax, I know it doesn't have to be consumed in an hour to work, I don't need to finish it all to get it to do the job and despite their recommendation, you don't have to mix it in Gatorade. As of this date, I'm still looking for the perfect mixer, and my chance will come again in the new year to try out of few new Miralax Martinis.

On the Wednesday afternoon before Thanksgiving, while the rest of you were watching the clock and eager for a 4 days weekend, I was looking forward to an uninterrupted nap on the gastroenterologist's table. As a stay-at-home-mom, you've got to get a nap in when you can. And if this is what it took, so be it.

I was expecting him to confirm what was expected, which was the Ulcerative Proctitis. As he stood over me asking questions, the last thing I remember saying was I had to go the bathroom again and him saying not to worry: "We've got good suction." I'm sure a concerned look came over my face, but it didn't really matter because I was out.

The next thing I knew I was waking up from my drug-induced nap to see the doctor standing there saying "likely malignant tumor" and walking away. I was in a fog, and with those words it just got foggier. I left with nothing more that a piece of paper showing tiny photo of what was suppose to be the tumor and the note that they would set up an appointment for a CT scan and an appointment with a colorectal surgeon. I knew it was in my sigmoid colon and it was blocking so much of my colon that he was not able to get the endoscope past it. There was no rub on the back, no follow up call, no other information. I left there in a daze from the anesthesia and this news that left all of us stunned.

I spent the next 24 hours in tears. I'm not going to under exaggerate that. I woke up the next morning with eyes so puffy all I had were little slits to see out of. Going over to be with family for Thanksgiving wasn't even on my radar. I just walked from room to room with a million thoughts in my head and so many unanswered question. Kyle would occasionally walk around to find me and we would sit in silence or talk, but I don't remember being very useful that morning. I cried often and could not wrap my head around the unconfirmed fact that I had cancer.

I had spoken with one of my best friends the night before. As a Physician's Assistant and a friend, she didn't sugar coat it for me. She said when they use the word malignant, they mean cancer. Cancer. I still couldn't bring myself to say it, especially because it wasn't official.

By lunch time, we were well into distracting ourselves with Christmas decorating when we got a text from my dad. Prior to sitting down for dinner, my uncle mentioned that he was friends with a colorectal surgeon in our area and sent him a text to see if he could provide information. It was, after all, a colorectal surgeon that I would need. Not only did he text right back, but he offered to call us at home. On Thanksgiving Day? A surgeon calling strangers at home on a major holiday just to help put them at ease? We were hooked.

The phone rang and the road we would be going down started to open up before us. The surgeon called and spoke with us for at least 30 minutes. There was no rush to get off the phone and he wanted to make sure he had answered every question we could come up with. He told us exactly what was going on, what to expect and what the next steps were going to be. He even promised that I would be "pooping like a 20 year old in a matter of weeks!" and he wasn't kidding.

And for the first time in 24 hours, I finally stopped crying.

The Patient Care Nurse called as promised on Friday, but was unable to get us in for a CT scan over the weekend. Too much financial liability paperwork to sign, and ultimately it wouldn't get read until Monday. She told us to be ready first thing Monday morning and we planned accordingly. Childcare was arranged and my morning coffee was withheld.

In case you don't have any good movies on Netflix right now, here's a video staring the now famous Dr. Ramirez, remover of my sigmoid colon and restorer of my pre-baby belly button.

Poor babe. I so know that feeling when you are told. There is no other feeling like it.

What a bonus that you got to talk to that surgeon. I don't know what it is about doctors that dump their bad news and walk away. Pricks.

A prick in deed. The worst moment in your life made worse by a doctor with no tact or bedside manor.

One thing that stuck out to me was how important it was to have the support of fmaily during that time. So glad your loved ones pitched in however they could.